How does pool mining works?

The task of the miner is to find a cryptocurrency block.

It is difficult for miners to find a block alone, so the miners cooperate with the help of mining pools. The mining pool helps to divide the task of finding a block among the miners.

The reward for the blocks found is distributed among the miners in proportion to their contribution to the block search task — everyone gets as much as they put in the effort to find the block.

Miners are solving the task, finding solutions (sol), or shares.

The reward that a miner receives from the pool is determined by the number of shares that the miner found and sent to the pool, and they were accepted and counted by the pool — share accepted.

Accepted share — proof that the mining device is working correctly. The more shares (solutions) the miner finds — the more reward he receives for his participation in the search for the block.

Imagine an apartment building in which repairs are going on (blockchain).

It is too long and difficult for one worker (user miner) to make repairs to the whole apartment (finding a block alone is difficult).

Workers (miners) team up in teams led by a supervisor (pool) to make repairs to the apartment and get paid — (get the block).

At the construction site, the boss evaluates the work according to the criteria he understands, while the pool evaluates the effort expended by the miner using such an indicator as the difficulty of the share.

No, the difficulty of the share on the pool does not affect the miner's profit!

The more difficult the share is, the more expensive it is, and the less often it can be found by your graphics card, and you need a more powerful graphics card to find it.

Imagine a construction site.
There are two piles of bags with cement.

Two porters came to the construction site and paid the same wage — $100 for carrying one pile. The first porter is experienced — he got a trolley (miner with a robust farm or ASIC), and the second one is a newbie — he took only gloves (miner with one GTX 1060 graphics card).

It is best for the boss if the bags are big — it is easier to count them.
If you hire a loader with a cart, he will move all the bags quickly.
Also, big bags are easy to calculate!
Calculating one hundred bags can be confusing…

But what about the ported without a trolley? (a miner with a weak GPU) He either got to carry the bags slowly, straining his back (if he can even lift them), or he needs to find another job he can do.

The porter with the trolley doesn't care. (a miner with a powerful mining rig) If doesn't matter for him to carry 10kg bag or ten 1kg bags. The same number of trips, same time, same money.

Regardless of the porter's strength and equipment, it's better for all the porters to do the job where the bags are smaller and lighter so everyone can get the work done.

Counting the bags is the supervisor business 😉

The second one? That's what we thought! Welcome to Kryptex pool!

Kryptex welcomes all miners, and it doesn't matter if they have powerful graphics card. We give work to everyone, and everyone gets paid fairly! And our , most powerful server will quickly and accurately calculate all shares😎

😤 For the most persistent, a practical explanation

For example, consider ETC coin mining on the Kryptex pool. 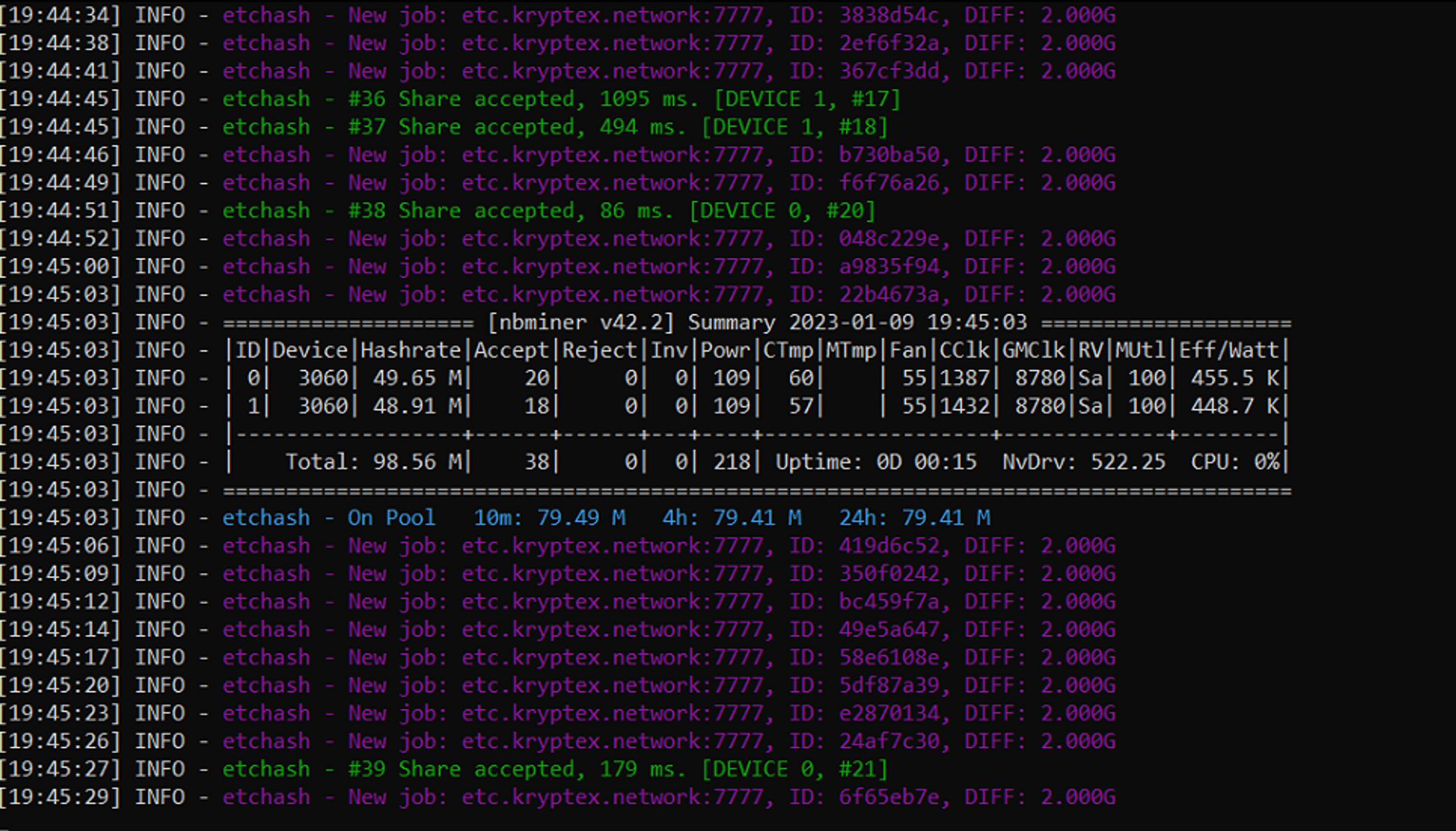 How do I know if that's a lot or a little? You can check if the card is working correctly!

Checking whether the graphics card is working correctly

Knowing the difficulty of the share on the pool and the equipment's power (hashrate) — you can calculate the average time the share takes to be found on the pool.

Why? To see if our graphics card is working correctly. To do this, we need the following:

The longer the continuous mining time, the more accurate will be the estimated and actual number of shares found by the graphics card.

This average value is based on a pool difficulty and is relevant for a specific time interval. The shares may often come in the beginning, e.g., every 5-10-20 seconds and then every 1-2-5 minutes. On average, we will get about 0.67 minutes.

It happens because the difficulty of each individual share may be different. It depends on the "luck of the equipment" (GPU or ASIC) and how fast it could find the share.

So, we know the average time it takes for a share to be mined on a pool with a given difficulty. In our case, we got 0.67 minutes.

Knowing our uptime (continuous mining time), we can calculate the approximate number of shares that our equipment will receive.

From the initial data — the miner was running for 15 minutes.

In the pool statistics, the user can observe whether the hashrate is higher or lower than what his miner window shows. It happens because the pool calculates the hashrate relative to the accepted shares over a while (6 hours, 12 hours, 24 hours) instead of taking the hashrate from the miner window.

The longer the period of uninterrupted mining, the smaller the difference between the calculated and the actual number of shares.

It is more important to calculate the income over a long period. The longer, the more accurate the value.

Remember the construction site: 20 shares at 2 GH or five shares at 8 GH will cost the same to a miner.

You'll get paid the same whether you do one or the other!

This article is available in other languages: